Instruction Coordinator & Faculty Outreach Librarian at the College of Western Idaho ∴ Literary, media, & cultural studies ∴ Web Editor at In the Library with the Lead Pipe. ∴ Another world is possible.

This post is for Week One of MOOC MOOC: Critical Pedagogy. 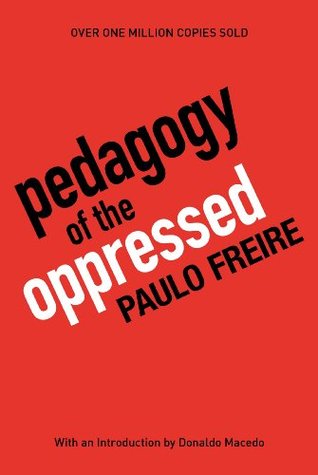 Processes. Processes, all the way down.

That’s what strikes me most about the first three chapters of Freire’s The Pedagogy of the Oppressed: his insistence on processes of becoming, of history, of liberation, and of course, of pedagogy through dialogue.1 This insistence on processes profoundly helps make sense of Chapter Two, the chapter most commonly referenced among educators intent on discussing critical pedagogy. The other main thing that sticks out is Freire’s particular brand of humanism—a humanism made palatable to someone fond of Foucault’s deep questioning of anything like an inherent “human nature” precisely by Freire’s attention to historical and interpersonal processes of becoming.2

Freire’s humanism-of-becoming also works due to his use of words like “love” and “generosity,” which focus on actions toward others rather than supposedly interior attributes or essences that have been repeatedly been shown to be historically and socially produced. Two great reads about this social & historical specificity are Shawn Michelle Smith’s American Archives: Gender, Race, and Class in Visual Culture and Allan Sekula’s “The Body and the Archive.” I mention these in particular as they focus on the role of archives in helping to produce these social effects, something to be kept in mind by fellow critical library & information studies people.

Freire’s problem-posing method aims to develop agency within those who are oppressed—those who see their position as timeless, static, and therefore impossible to change. The details in Chapter Three make it abundantly clear that he’s discussing adult education rather than the K-12 and higher education settings to which his thought is often directed in America. While this shift certainly doesn’t mean that his discussion of the “banking model” or his preference for problem-posing and dialogue are misguided, it’s still worth paying close attention to the specifics of current education to anticipate the snags that might arise if one tried to unthinkingly wrench his problem-posing method out of his particular historical situation. One could certainly argue that someone who thinks that education is ultimately justified to the degree it accomodates a student to the workplace has been oppressed by neoliberal ideology. Even for those hesitant to take this tack, Freire’s problem-posing, dialogic method makes a great case for preparing students to become agents capable of critical thinking and thoughtful engagement with the world.

What I’m left wondering about with importing Freire’s method to American education, particularly higher education, is ultimately less about the problem-posing, dialogic method itself and more about what sorts of structural changes might be necessary to help educators pursue it. To wit, here’s a partial list of conundrums:

In differing ways, each of these concerns decreases the ability of educators to function as “guides on the side,” a useful metaphor and interface from the University of Arizona Libraries whose use of active learning was amplified by Meredith Farkas.

Ultimately, my question is less about how we should foster Freire’s problem-posing pedagogy within individual classrooms and more about how we can reshape education to enable it throughout our campuses and society. To me, critical librarianship is one approach, as it helps students become capable lifelong learners. Although librarians like Emily Drabinski and Barbara Fister have advocated critical approaches to librarianship for years, posts such as Brian Mathews’ recent column for the Chronicle of Higher Education show that “#critlib” is receiving attention in venues beyond libraryland.

Revisiting Freire also has helped me work toward a more succinct personal vision of critical librarianship, one attentive to critical theory while always placing it in the service of “the continuing transformation of reality” (92). As Freire writes, “Problem-posing education affirms men and women in the process of becoming—as unfinished, uncompleted being in and with a likewise unfinished reality. […] The unfinished character of human beings and the transformational character of reality necessitate that education be an ongoing activity” (84).

Here’s hoping that more educators look to being “guides on the side” who help learners of all ages confront systems of information, knowledge, and education that might not be designed with generosity—and that critical librarianship helps us learn to design information systems with such generosity in mind.

You may also enjoy

Links related to a lightning talk for the 2020 MOSS Meetup about our switch from the CRAAP test to the SIFT moves.

Monthly signal boosts will be short reflections on what I’ve read, listened to, watch, etc.

ah, Carl, while you are not safe I am not safe

The social model of disability offers insights into society, differences, and oppressive structures beyond disability.