Instruction Coordinator & Faculty Outreach Librarian at the College of Western Idaho ∴ Literary, media, & cultural studies ∴ Web Editor at In the Library with the Lead Pipe. ∴ Another world is possible.

This post was originally an assignment for John Walsh’s “Z652 Digital Libraries” course at IU-Bloomington.

Two talks given at IU in the last month offer insights for digital libraries, one benefiting from direct experimentation with forms of scholarly communication and sustained analysis of academic practices, while the other’s scope provides an intriguing provocation about what libraries might consider as “digital” material. On 2014-10-30, Kathleen Fitzpatrick gave a talk related to her book Planned Obsolescence as part of the celebrations of the new Scholars’ Commons. Soon after, on 2014-11-13, Nicholas Basbanes gave a talk entitled “Paper: A Defining Technology” at the Lilly Library. Surprisingly, each presentation highlighted the practices and situated use of their subject matter, a feature which makes them work well together to discuss digital libraries. Below are abstracts and screenshots of the promotional pages for each talk: 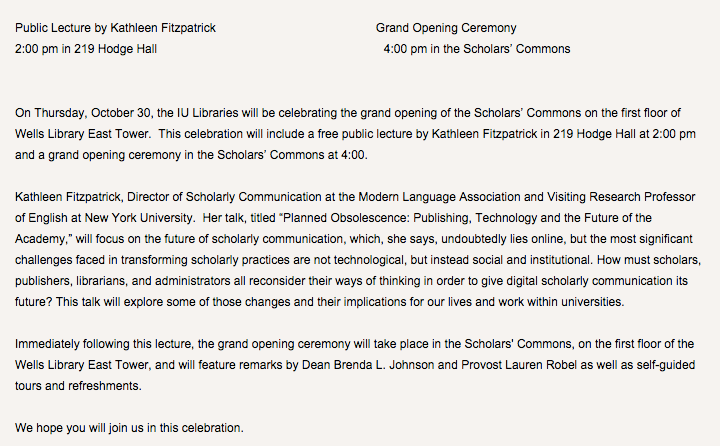 On Thursday, October 30, the IU Libraries will be celebrating the grand opening of the Scholars’ Commons on the first floor of Wells Library East Tower.  This celebration will include a free public lecture by Kathleen Fitzpatrick in 219 Hodge Hall at 2:00 pm and a grand opening ceremony in the Scholars’ Commons at 4:00.
Kathleen Fitzpatrick, Director of Scholarly Communication at the Modern Language Association and Visiting Research Professor of English at New York University.  Her talk, titled “Planned Obsolescence: Publishing, Technology and the Future of the Academy,” will focus on the future of scholarly communication, which, she says, undoubtedly lies online, but the most significant challenges faced in transforming scholarly practices are not technological, but instead social and institutional. How must scholars, publishers, librarians, and administrators all reconsider their ways of thinking in order to give digital scholarly communication its future? This talk will explore some of those changes and their implications for our lives and work within universities.
Immediately following this lecture, the grand opening ceremony will take place in the Scholars’ Commons, on the first floor of the Wells Library East Tower, and will feature remarks by Dean Brenda L. Johnson and Provost Lauren Robel as well as self-guided tours and refreshments.
We hope you will join us in this celebration. 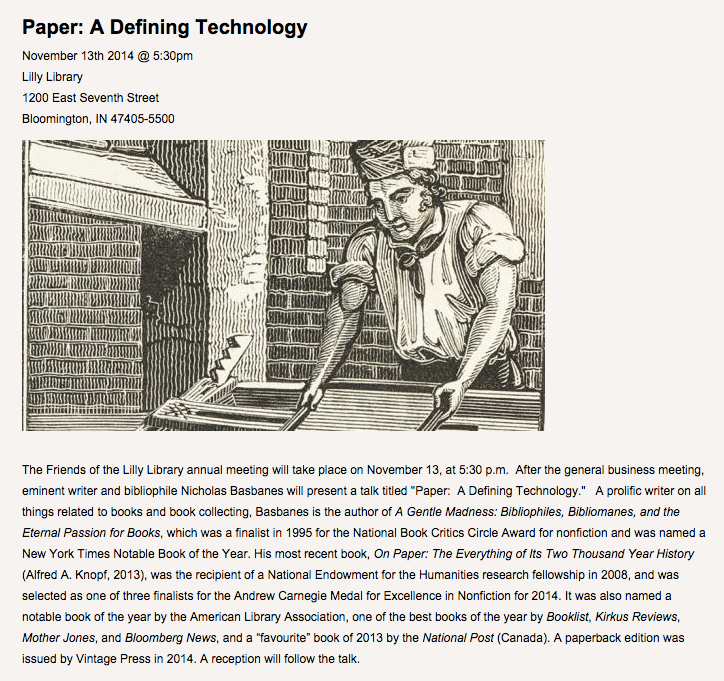 The Friends of the Lilly Library annual meeting  will take place on November 13, at 5:30 p.m. After the general business meeting, eminent writer and bibliophile Nicholas Basbanes will present a talk titled “Paper: A Defining Technology.” A prolific writer on all things related to books and book collecting, Basbanes is the author of A Gentle Madness: Bibliophiles, Bibliomanes, and the Eternal Passion for Books, which was a finalist in 1995 for the National Book Critics Circle Award for nonfiction and was named a New York Times Notable Book of the Year. His most recent book, On Paper: The Everything of Its Two Thousand Year History (Alfred A. Knopf, 2013), was the recipient of a National Endowment for the Humanities research fellowship in 2008, and was selected as one of three finalists for the Andrew Carnegie Medal for Excellence in Nonfiction for 2014. It was also named a notable book of the year by the American Library Association, one of the best books of the year by Booklist, Kirkus Reviews, Mother Jones, and Bloomberg News, and a “favourite” book of 2013 by the National Post (Canada). A paperback edition was issued by Vintage Press in 2014. A reception will follow the talk.

Kathleen Fitzpatrick’s talk, “Planned Obsolescence: Publishing, Technology, and the Future of the Academy” comprised part of the opening celebrations for IU’s new Scholars’ Commons. The main threads of her talk were that book-based scholarly communication has increasingly become outmoded due both to the economics of book publishing and to the nigh-invisibility of the labor that goes into being a peer reviewer, editor, or academic publisher. She offered her own initial draft publication of Planned Obsolescence for public comments and other Media Commons projects as examples of alternate modes of scholarship that can allow for peer review to be recognized in deeper ways than with current practices.

Furthermore, she argued that academic publishers now function more as content filters than true gatekeepers, for it is increasingly trivial to effectively “publish” one’s writing by posting it publicly online. Despite their economic death—the average academic book sells fewer than 400 copies—academic books remain in an unsettling zombie-like state, animated primarily by the crucial role they plan in tenure practices. Fitzpatrick suggests that we must change tenure committees’ exaltation of paper-printed books over other peer-reviewed forms in order to advance disciplines that have predominantly used that form for the last 60-odd years.

This expansion of scholarly publication formats is relevant to digital libraries for a number of interconnected reasons. Librarians with technical skills can help with the publication of academic works online, of course. More generally, librarians can also help online scholarly practices become more common and respected within academia by demonstrating how they allow for extra affordances that paper does not. Fitzpatrick mentioned how online communication can help reveal the labor obscured in traditional academic publishing practices, but online publications can also make academic work more readily accessible to screen readers and similar technologies. Additionally, helping budding researchers distinguish between quality, peer-reviewed scholarship that will have credence in their fields and something masquerading as such will remain a core part of instruction, both for librarians and traditional faculty, for as long as these differences matter.

In addition to indirectly bolstering the role that librarians can play for academic publishing, Fitzpatrick’s talk has implications for the creators of online projects. She argues that communities engage far more around open, in-process work than around finished products, using her own born-digital publication of Planned Obsolescence as a commentable online text as an example. While scholars like Michael Warner contend that every text rhetorically invokes a public, online resources do so demonstrably. Above and beyond merely tracking “engagement” through screen hits and mentions, librarians and others making digital projects can attempt to engage visitors in meaningful ways. The New York Public Libraries have begun allowing online users to assist with transcribing and marking items in the “What’s on the Menu?” project, for instance. Librarians can use digital technologies to extend scholarly communication practices to new audiences, as well as enhance current practices such as peer review in meaningful new ways often obscured by the dominant, paper-centered publishing practices.

The two most striking aspects of Basbanes’ talk were its capacious scope and its predilection to emphasize storytelling over analysis. Basbanes’ talk moved far beyond treating paper as a vehicle for scholarly communication, ranging into the technology’s affordances for modern sanitation (toilet paper) and warfare (prepared musket cartridges tripling the number of shots a gunner could shoot in a minute). While being quite flexible in terms of the range of applications of paper considered, Basbanes held to a relatively narrow definition of the substance: when the question of papyrus was raised, Basbanes cut the questioner off with an explanation that he was interested in the cellulose material and its spread, not the laminate that was geographically constrained to the Nile area. Despite their similar use, Basbanes clearly prefers paper due to its more global potential for production. Indeed, paper’s global nigh-ubiquity seems to have motivated his preferred title for the book, “Common Bond,” which he admitted is a “cute” pun on a particular grade of durable paper.

This talk’s relevance for a digital libraries class is twofold. First, it helps establish the breadth of potential artifacts on paper beyond books, reinforcing the nuance of description that could be relevant when representing items digitally. Basbanes exemplifies the sort of scholar for whose work the descriptor “paper” would not be sufficient. While not relevant to every digital library project, his work serves as a reminder to consider the users and their needs when creating descriptions. Second, the scope of what he considers “paper” makes one think about what might be considered the “digital” for libraries and collections. What range of digital objects might future scholars wish to see preserved, and what are we already losing to the rapid obsolescence of operating systems, file types, or programs? How can we preserve the experience of working with digital programs and files for future scholars, when it’s often difficult to even preserve files that are meant to be outcomes, such as “stable” documents in proprietary formats?

Despite their very distinct subjects, these talks share a focus on the varied practices and applications that users bring to their respective materials. Fitzpatrick admitted to having a techno-utopian streak, yet recognized that tenure committees’ expectations around publication will continue to limit scholarly communication practices. Digital librarians would be wise to remember that we can help alter these practices by not only conscientiously creating projects, but also demonstrating the labor and scholarly choices that go into them. Basbanes showed the breadth of what can matter to a scholar, and digital librarians can certainly take guidance from the wide-lens scope of his inquiry when considering what to include when creating projects that focus on born-digital items.

You may also enjoy

Mindfulness with the Waking Up and Plum Village apps; Most excellent tunes from Sonic D and Autodidact

Links related to a lightning talk for the 2020 MOSS Meetup about our switch from the CRAAP test to the SIFT moves.

Monthly signal boosts will be short reflections on what I’ve read, listened to, watch, etc.